Ok that’s a cheesy line from Kenny Chesney’s album but I love it. Ryan likes to call him Kenny Chesnuts but I just ignore him. It doesn’t deter my love for his music!

This past weekend I flew down to see Ryan in Cayman. Since Ryan and I won’t be together this year for Valentines Day we (I) decided to go somewhere nice for dinner. We went to Eric Ripert’s Blue restaurant early to celebrate. I’ve never been to Riperts (Ryan likes to call him the Ripper) original Le Bernadin in New York but I’m sure Blue provides a nice, if not faint, glimmer to the taste of the his flagship restaurant…if it were in a relaxed carribbean island that is. I’ve been trying to take more photos to work on my camera skills and decided to bring it into the restaurant. Normally they don’t like flash photography at high-end restaurants but I think they sort of let it slide as Cayman is a pretty big tourist resort and people are a little more relaxed in the carribbean. No jacket and tie required here also hints to the relaxed policy.

We had the 7-course tasting menu much to Ryan’s discouragement, eyebrow raising and skepticism on me finishing my meal. He  always gets exasperated, sighs audibly and goes “Really May? You can’t even finish a regular meal”. I’m always trying to squeeze in a third appetizer and side whenever we go out for dinner. Poor Ryan and his curse of the over-ordering girlfriend syndrome. He gave in this time though after much convincing that we’d only do these painfully long drawn-out dinners once a year (it was 2.5 hrs in total).

Ryan insisted he ‘deconstruct’ his snapper dish to get it ready for the camera. It’s supposed to have an ‘eaten’ feel to it.

Earlier that day I went the spa. When I told Ryan I had booked it the week before, he said “Really? You’re coming all the way down here just to go to the spa?” “I really need a massage!” I argued, trying without any real substance to make my case more favourable. “And uhh, my IT band is tight from all this running! And..um… I’ll be on a plane travelling for 12 hours on a red eye to see you for!”

He wasn’t convinced… so I had to use the W word. Work. “Why don’t you work for a few hours Saturday while I’m at the spa? You’ll get sooo much done and out of the way.” For all of you who know Ryan the work-a-holic, you’ll be amused to know that the W word perked him up immediately and he agreed to the whole thing 😉 . Fortunately Ryan knows my buttons too and he’ll use them occasionally to get his way. He knows I can’t stand clean laundry on the bed so if he throws it on there, I’ll get angry and start folding it. He also likes to look at something and go “this bread would be a lot better buttered” and look at me with pretend puppy dog eyes expectantly… so it’s a 2-way street this getting our ways. Little victories we let each other win for the sake of enabling more joy and happiness to one another. I think we are good at knowing when to give in and what’s not worth arguing over.

After dinner we joined his co-workers at their local bar, Eduardos. They frequ
ent it many nights a week so much so that they even have their own liquor boxes. You have a key and you can store whatever bottles of liquor you want. Ryan has yet to put anything in his box and it’s been a few months. He keeps on lamenting about how cold it is at the bar and how he wants to put a sweater in his box so that he can take it out just like Mr. Rogers did in Mr. Rogers Neighbourhood. 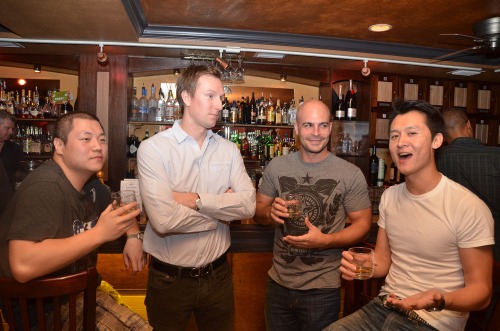 These are the guys he works with: Sam, John and Ying.

And this is my final ‘artistic’ shot of Ryan. I call it “the last rose” like in The Bachelor.

One thought on “"Give a little, love a lot"”